The piece shown here is a pair of women's shoes made with luxurious silk damask. The latchets are tied with ribbons. This shoe is an excellent piece that shows the fashion at that time; with its a thick, curved Louis Heel which is associated with the age of Louis XIV, along with the upturned, pointed toe. 18th century women's shoes were one luxury accessory that symbolized the elegant and sophisticated Rococo culture. For the formal dress, the shoes made with matching fabric of the gown or embroidered were worn. At this period, shoes were not shaped to fit the right or left foot. 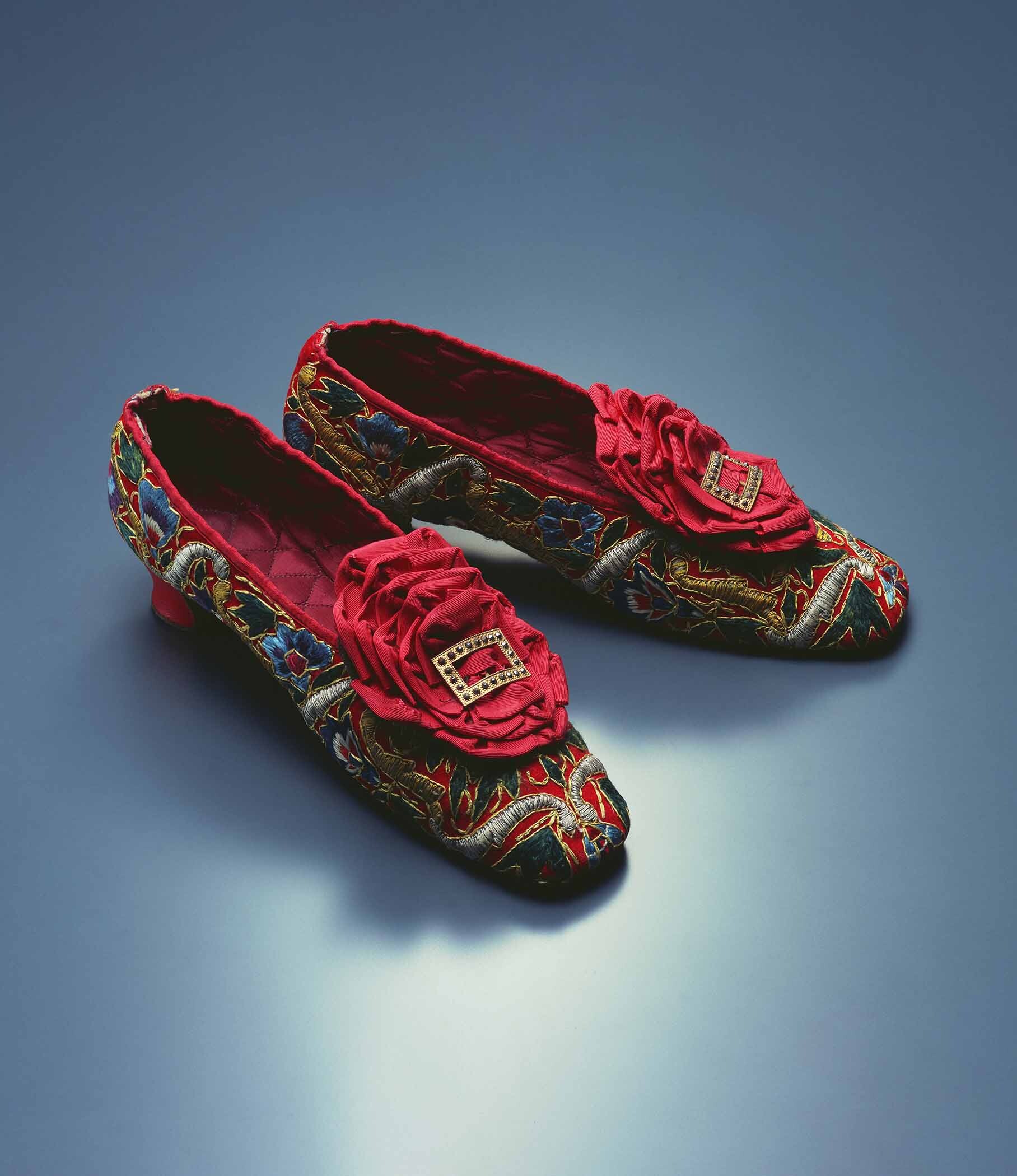 These women's shoes were fabricated in England, using embroidered cloth imported from central Asia. The design vividly tells of the appreciation of textiles and embroidered goods from the East that occurred in Europe during the middle of the 19th century. The technique of applying designs of flowers and grasses by using a plenitude of differently colored threads is called "Bokhara embroidery". It originated in Uzbekistan's Bokhara (Bukhara). The outlines of the motif were first created with single-color thread only, and the shapes were then covered and filled with silver and colored thread. While the designs itself show strong influence of Persian textiles, the abundant use of silver thread is a characteristic of the region of Bokhara.

These high-heeled pumps possess a vivid contrast of red and black, as well as a decorated strap that was popular in the 1920s. Skirt-length rose up to the knee and shoes played an important role in the fashion of the time. Because of this trend, shoe designers who functioned differently from conventional shoe craftsmen became active. André Perugia gained his fame making shoe designs for Paul Poiret, and he became known as one of the most talented shoe designers in the first half of the 20th century. His detailed designs, rooted in the shoemaking craft and the engineering knowledge cultivated by the military, were highly valued. In the 1930s, Perugia created shoes for Elsa Schiaparelli that were quite surrealistic.

These are Art Deco period heels referred to as "jeweled heels". They are a sample from a time when heels were custom-ordered. With enamel manufacturing put to practical use on shoes since the end of the 18th century, and the implementation of Bakelite and similar resin treatments in 1909, the heels radiate a glossy shine. Moreover, they show the subtle workmanship of geometric designs, and limestone and metal bead application, At that time in Paris, couturier and artisans specializing in custom-order footwear created luxurious shoes. Craftsmen who signed their names on shoe designs, like Andre Perugia, also appeared. Then, in the 1920s, Western European women began exposing the leg below the knees for the first time. When compared to the existence of footwear up until that period, this becomes an important matter. Shoes which utilize functionality paired with small engraved designs and various historic moldings. Of these shoes, 1920s footwear that reflects art deco designs can be said to exhibit a special charm equal to a kind of objet d'art. 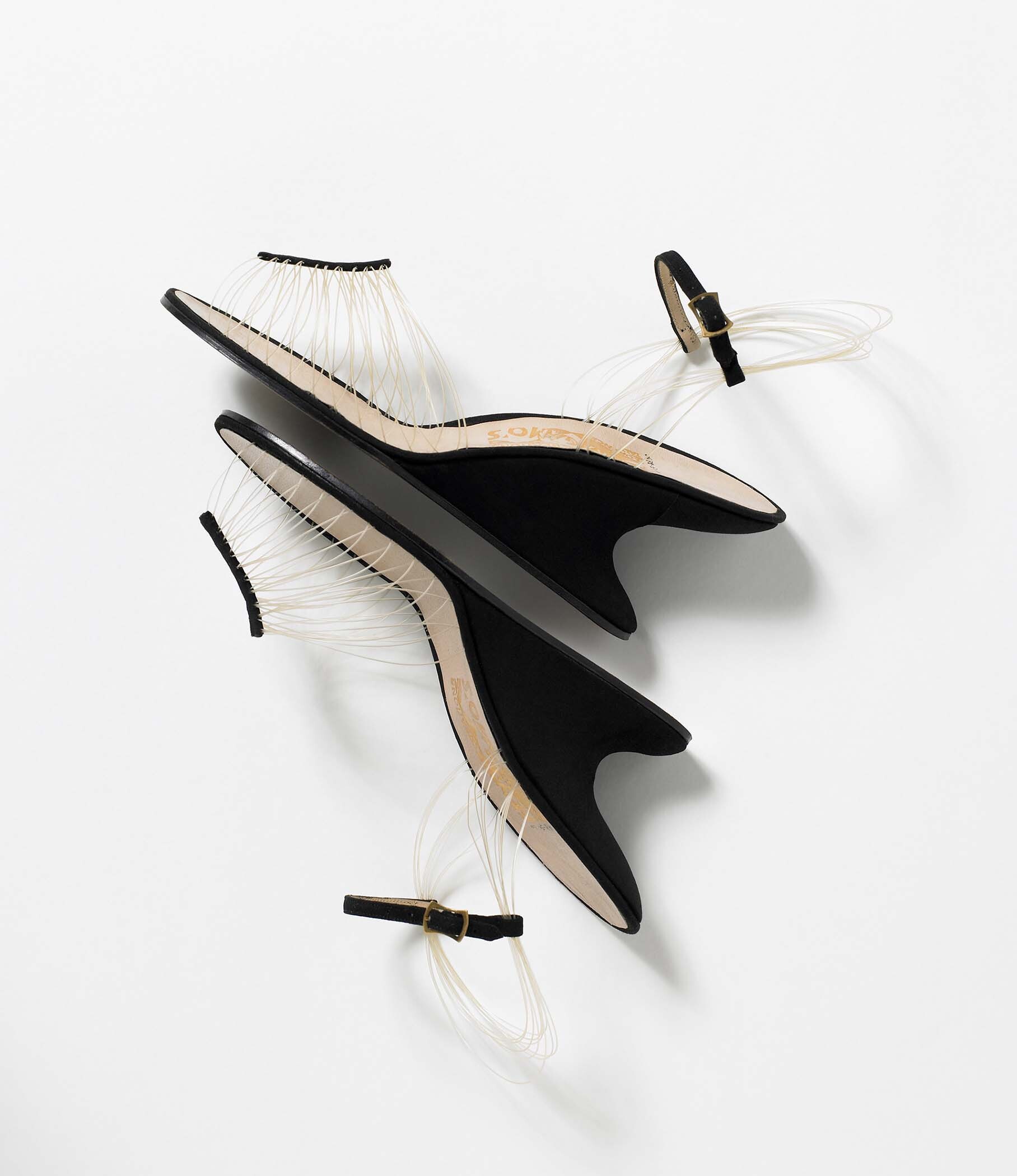 This "invisible" sandal was created using the new material of nylon when it first became available. By winding nylon threads from the instep under the sole several times, the transparency of the nylon made the strap at the instep appear to float unsupported, fascinating everyone who sees the shoe. The wedge heel beautifully sculptured to resemble a letter "F" is also an idea attributed to Salvatore Ferragamo (1898-1960). The dramatic curve of the heel at first looks highly unstable, but it is actually backed by careful structural calculations that make the shoe comfortable to wear. This innovative use of materials, creation of new forms, and pursuit of functionality are testament to Ferragamo's dedication to shoemaking. For this sandal, he was awarded America's top fashion prize, the Neiman Marcus Award.
Salvaltore Ferragamo was born in Italy, began making shoes at the age of 9, opening his own shoe business at 11. Aged 15, he emigrated to the United States and found fame as a shoemaker with a strong clientele of Hollywood stars. Constantly searching for improvements and ideas, he studied anatomy at the University of Southern California, and employed the knowledge in his creations. In 1927, he returned to Italy and set up in Florence, making shoes for actresses and royalty throughout the world.

Shown here is a pair of pumps created by Roger Vivier for Christian Dior. The delicate toes and heels are typical of 1950s styles. Haute Couture houses provided not only dresses but also accessories such as bags and shoes, to offer totally coordinated luxury fashions to their customers.
Vivier, who was known as the couturier of shoes, became independent in 1937, and started making shoes for Dior from 1953. His eloquent shoes were a perfect match for the elegant and gorgeous Dior dresses. His shoes were worn by Queen Elizabeth II (1926–) during her coronation, and many famous people, including the Duchess of Windsor (1896–1986), and Elizabeth Taylor (1932–), were captivated by Vivier-designed shoes.

In these sandals from Miu Miu, the Prada diffusion brand, the soles are made of rubber as in sneakers. The combination of the driving shoes-like non-slip sole, the plastic heel, and the sneaker-like patent leather detail on the heel create a look that is sporty and casual.
Prada, which started as a luxury bag store, gained instant popularity when it turned the convention of using leather in bags on its head by designing bags made of functional nylon fabric. This product is also a manifestation of the sense of balance achieved by combining innovative and functional material with elegant design.