This corset is a vivid reminder of the painting, "Nana," by Edouard Manet (1832–1883). The center-front busk and bones mold the curve from the waist to the abdomen, while neatly arranging the lower abdomen, as well. Women used corsets in an effort to get closer to an ideal physical form of the time; until the beginning of the 20th century, their waists were tightened by the corset. With the development of modern technology, people applied their creative originality and corsets by new devices were born. In particular, the invention of eyelet in 1828 allowed great improvements in the tightening of the waist on a corset. 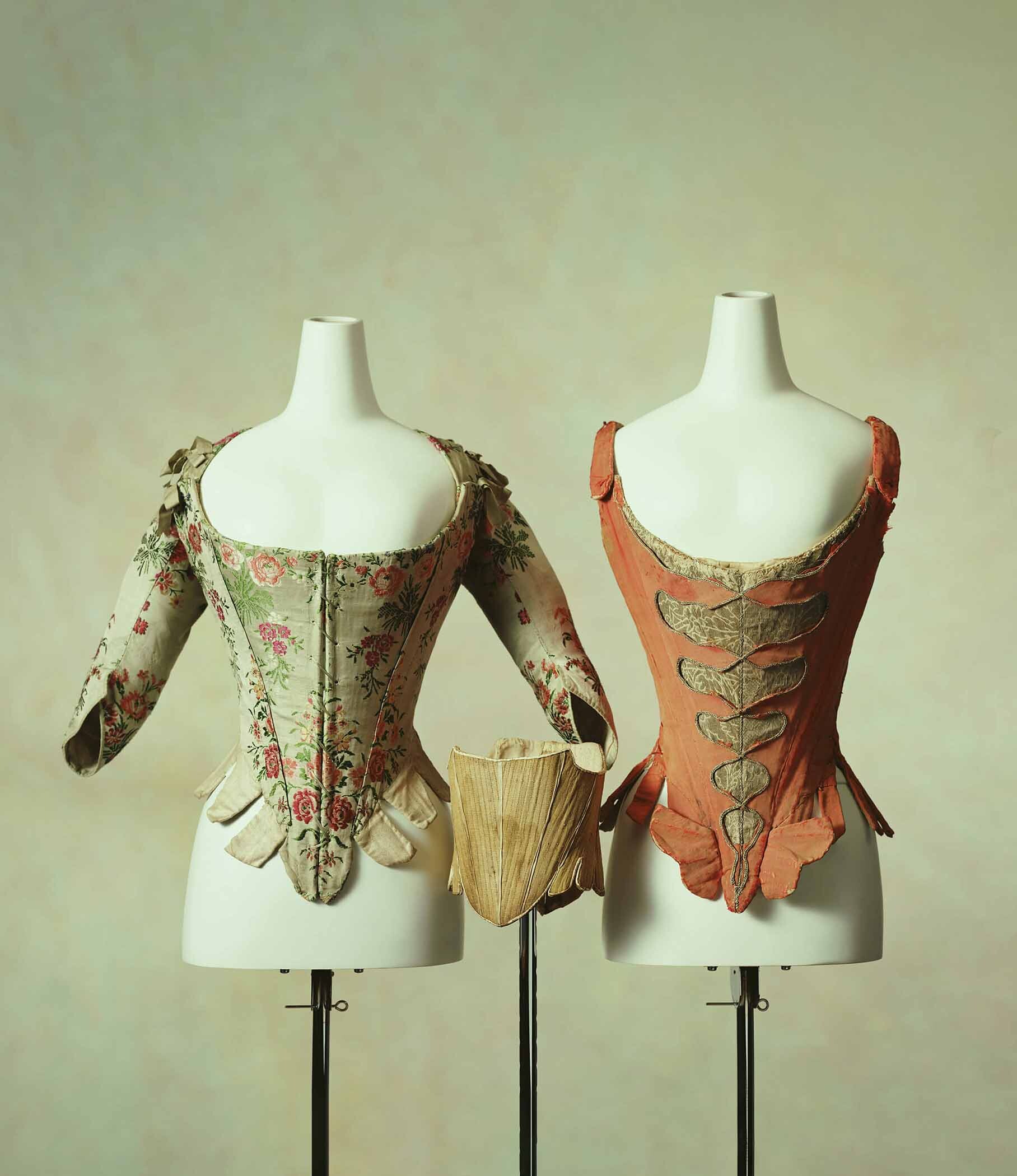 Of kind of corsets worn underneath clothing for the body, there are simple ones for undergarments, and ornamented ones worn inside the home for relaxation. The latter type of corset also occasionally had sleeves attached. In France, the guild of tailors had been established since the medieval period, and their role was strictly regulated, and clothes-making was work of the man. Although women were given the ability to participate in clothes-making in 1675 (Diderot and D'Alembert, "Encyclopédie", 1770-78) and female dressmakers ("couturière") appeared, only male tailors were accepted as makers of men's clothing and women's court clothing, and corsets. Since a man's strong strength were needed in order to stitch whalebones, especially corsets were limited to male tailors. 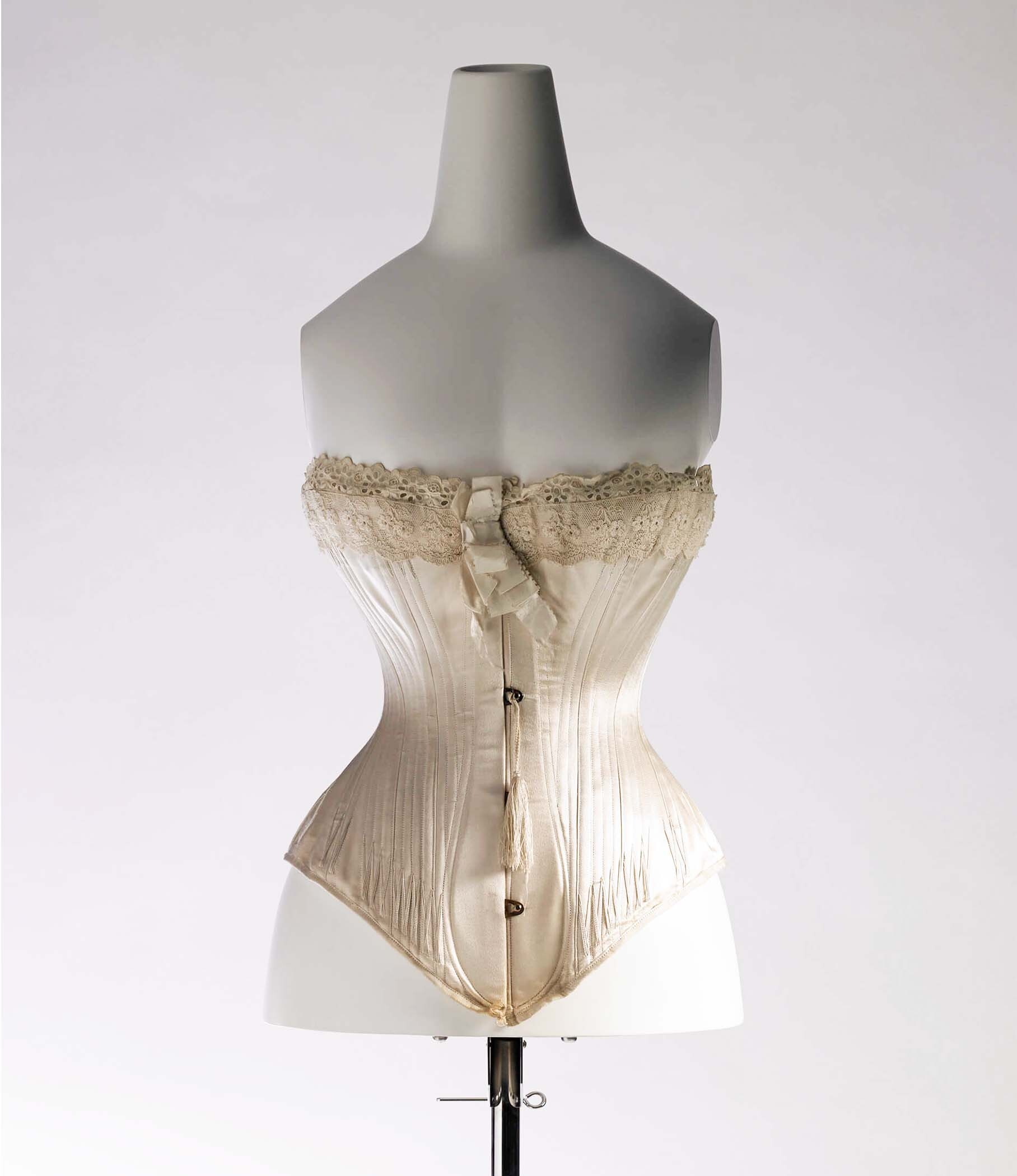 The metal spoon busk at front center and the satin-based textile identify this corset as a type popular in the 1880s. Spoon shaped busks were used from the mid-1870s to the end of the 1880s in the belief that they would put less pressure on internal organs as a result of the broader curved section spreading the load over the abdomen. The embossed gold paper on the hem at the back left marks the corset used the patent of Izod in the UK. This company, with its anchor trademark, was a corset-maker established in the mid-19th century by Edwin Izod (1826-87). In 1868, Izod developed a steam-molding process that enabled his company to produce corsets with elegant curves. The process involved pressing a wet and starched corset textile onto a steam-heated copper body form of the desired shape until both the textile and the inserted bones dried, taking on the curves of the copper form. The technique was used until the 1880s, and is responsible for the shape of this particular corset.

The brassiere of soft thin materials and flat shape. It was known as a band, because it was used to make breasts flat, instead of pushing them up. It is associated with the fashion of eliminating feminine body curves among the dynamic new women known as "Garçonnes" (a feminization of the French word for "boys"). Fashion in the 20th century moved to a new direction. Corsets, which had tightly constrained women's bodies and at the same time supported their bosoms, emphasizing the feminine curves of breasts, were discarded after World War I. That is why new underwear, the brassiere, was needed. The first brassiere introduced in Japan was of this type, and was called a "Chichi-band." 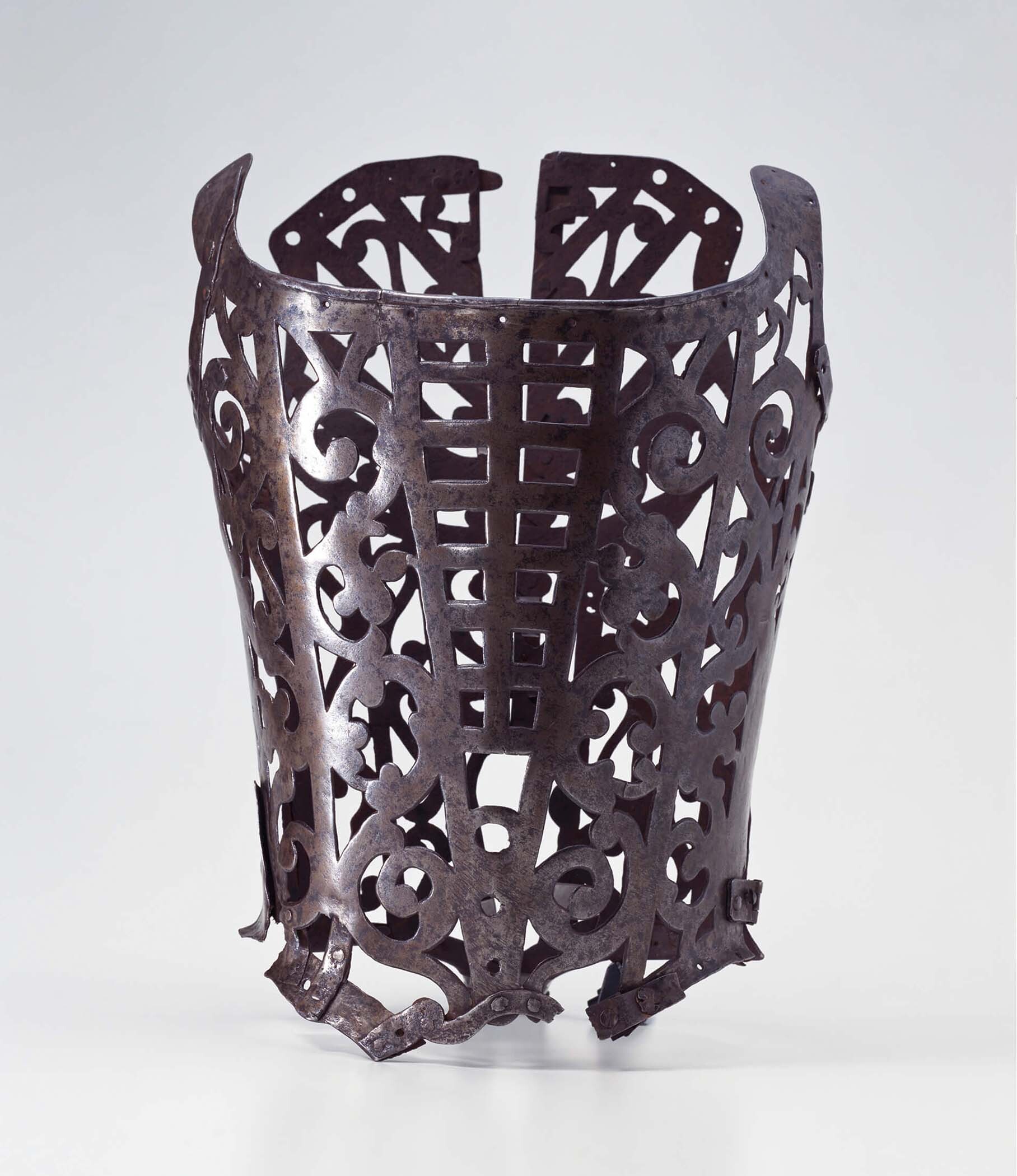 The origin of the corset as we know it today is uncertain, although corsets are known from the sixteenth century, in which a very robust corset, made of iron, also appeared. This item uses iron plates with geometrical and arabesque cutouts as ornamentation, having a single iron panel for the front, and two for the back, bent into a cone shape. The panels are joined by hinges at the sides and have a closure in the middle of the back. There are only a few examples of these garments, and virtually no contemporaneous records, so it has not been possible to ascertain actual usage or examples of their use. Nevertheless, they are considered to have been used for shaping the body. The first edition of the dictionary of the Académie Française, published in 1694, describes the “corps de fer” as being for hunchback prevention.

MaterialIron plates with geometrical and arabesque cutouts as ornamentation.