This "paper dress" represents the 1960s, the era of mass consumption. Simple form, mini length, and graphical motifs were in vogue for fabrics at that time, and are incorporated into this low-price disposable dress made in the U.S.
In the 1960s, disposables were popular, and this disposable dress is printed with images of Campbell's Soup cans. Needless to say, it was inspired by the use of the cans by Andy Warhol (1928–1987), the central figure in pop art, and represented a dress version of the mass produced images of mass produced objects that swept the world. Warhol himself made the "Banana dress" and the "Fragile dress" in 1966. 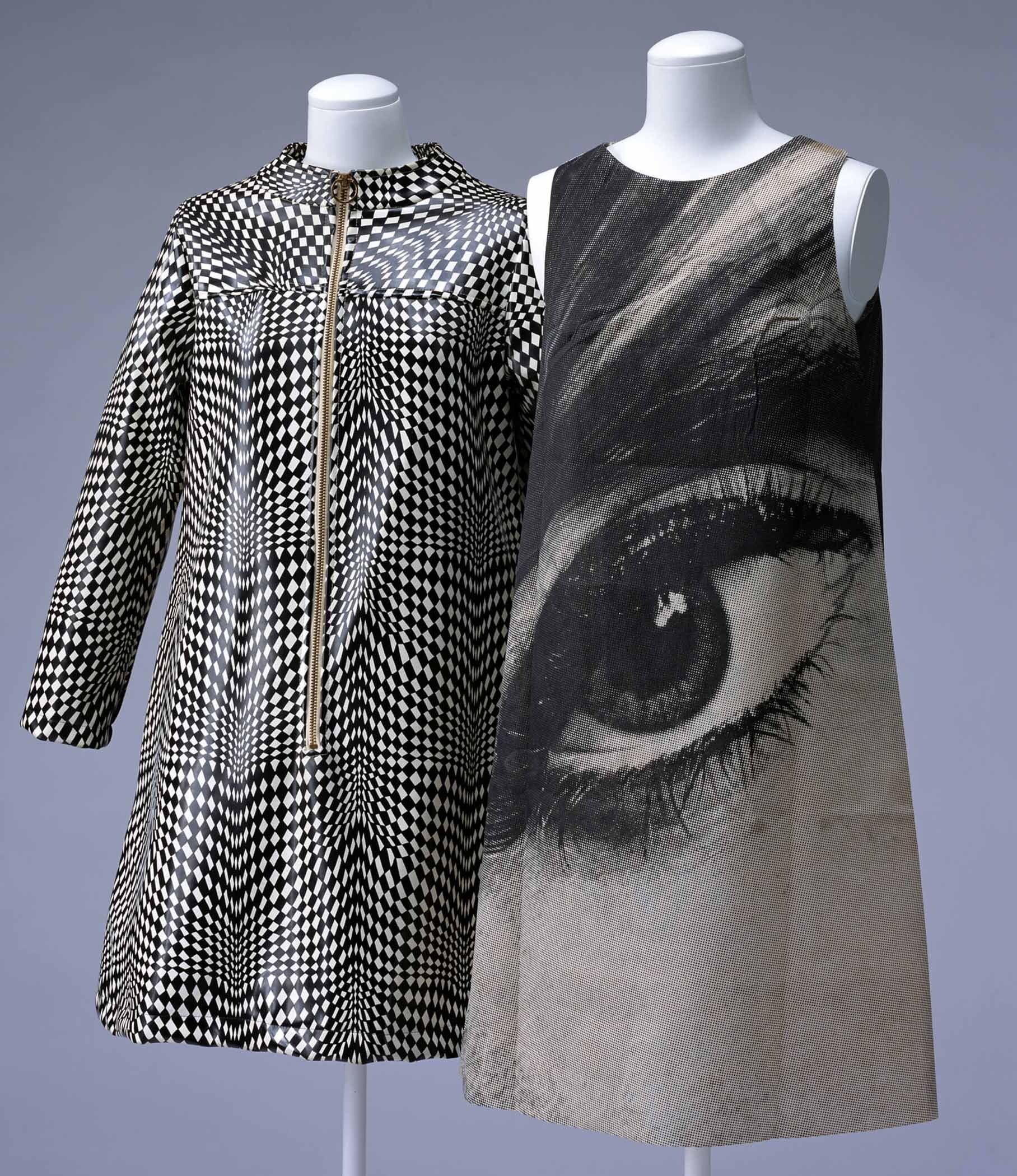 These two ready-to-wear dresses define the relationship between art and fashion in the 1960s.
During the 1960s, with the new mass consumption society in full swing, public attention was seized by the fine arts, including Pop Art, which was based on everyday objects in the mass consumption society and led by Andy Warhol (1928–1987), and Op (optical) Art, which studied and applied optical illusions, with Victor Vasarely (1906–1997) and Bridget Riley (1931–) taking principal roles. In Haute Couture, Yves Saint-Laurent (1936–2008) was among the first to apply those new art styles to fashion design. When reasonably-priced ready-to-wear dresses created a special furor in the just-started prêt-a-porter age, the arts spread in prêt-a-porter as well. Art and fashion were linked again via a new agent, the public, and it looks at the powerful links between the two disciplines since then. 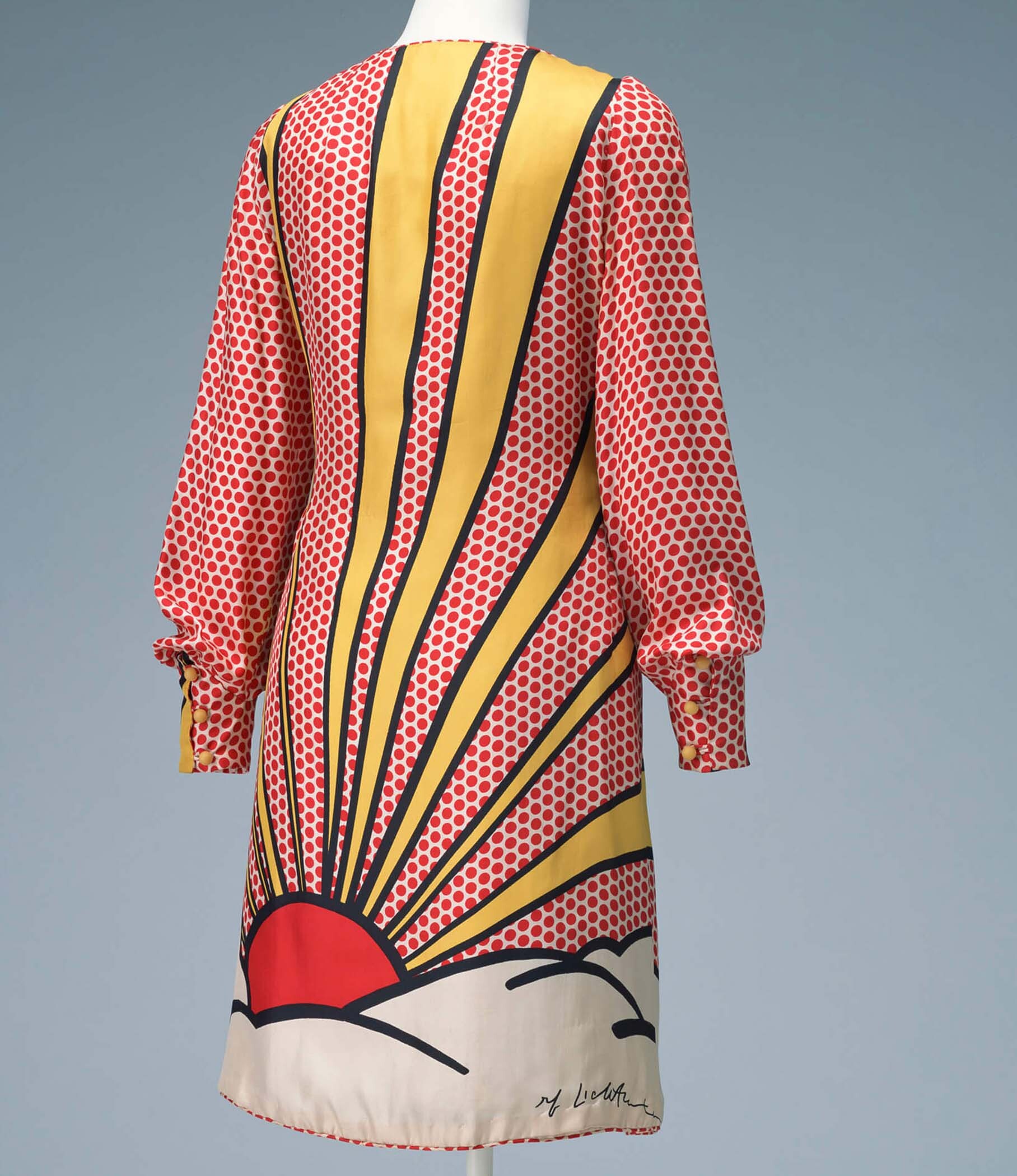 MaterialWhite satin one-piece dress, silk-screen printed by Roy LICHTEMSTEIN. Dotted in red all over and the rising sun and clouds on the back. Front and left side opening. Ivory silk satin coat with left side front opening by buttons. 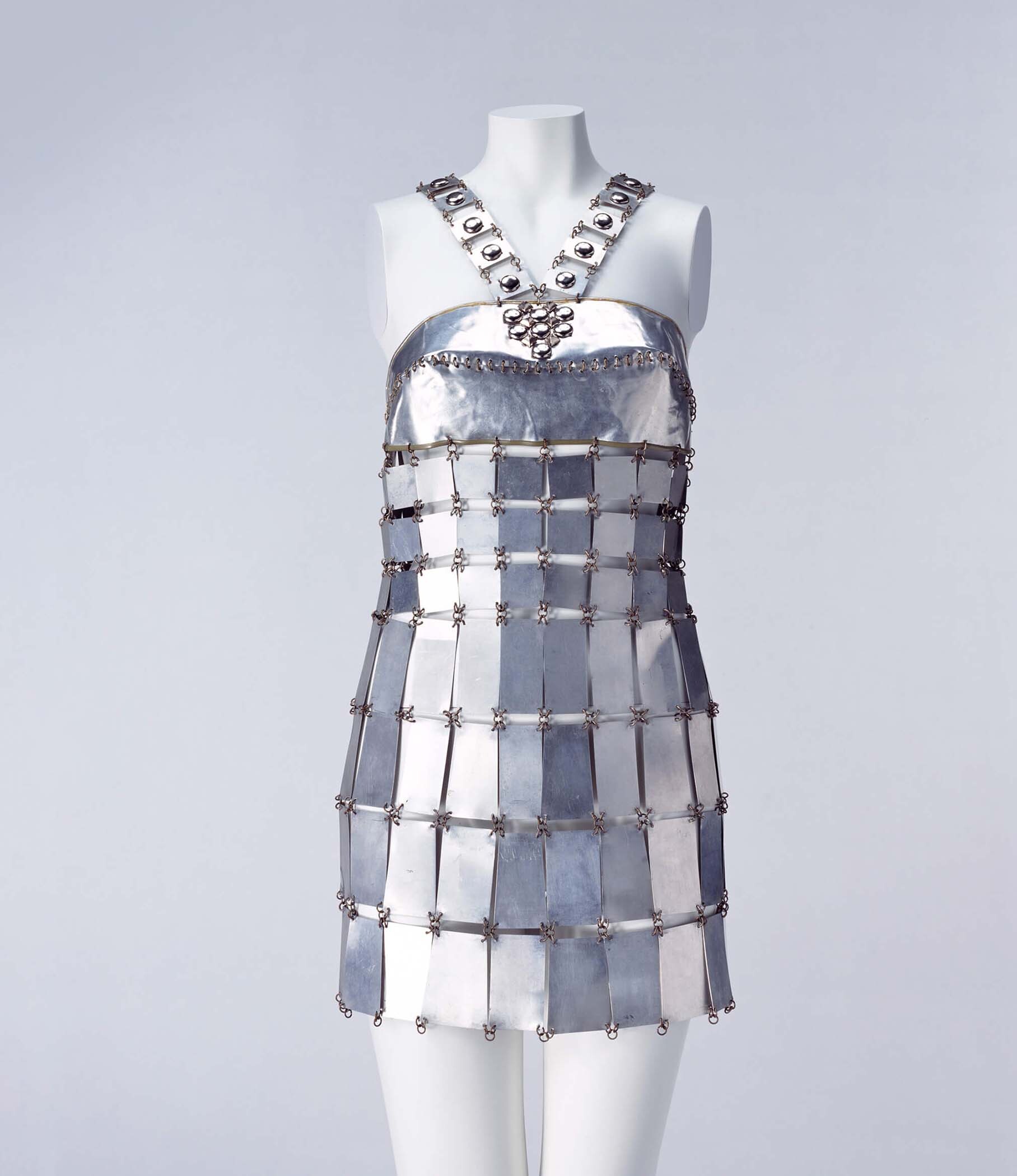 This mini dress made of aluminum plates sums up work of Paco Rabanne, known as the "Metal Worker." The inorganic metal "fabric" makes a striking contrast against the skin. It is one of the monumental dresses of the 1960s, implicating of androids' glowing hard skin in science fiction.
In the 1960s, people in every field made innovative use of new technologies, abandoning traditional techniques and materials, against the backdrop of remarkable achievements made by the space engineering and other advanced sciences. Paco overturned the common understanding that clothes had to use thread and fabric, and shocked many by using plastic for the dress in 1966. Using other new materials including metals and nonwoven fabric, since then, he gained fame in the late of 1960s.

MaterialMini dress made of aluminum plates and brass wire. 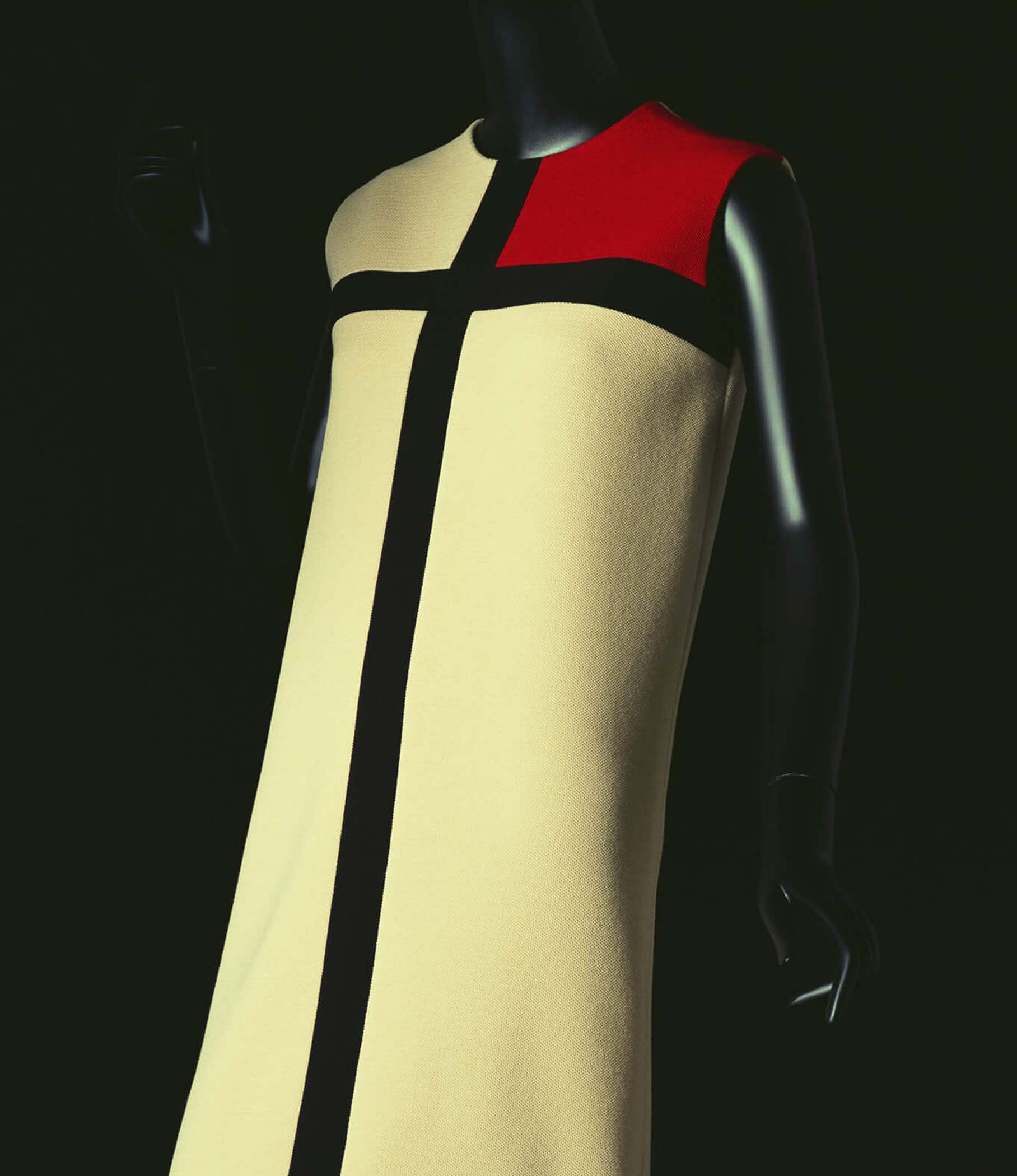 This dress is a masterpiece by Yves Saint-Laurent, a leading designer of the 20th century. A straight A-line dress with boldly set primary colors, bordered by black straight lines, was created after "Compositions," famous paintings by the Dutch painter Piet Mondrian (1872–1944). The abstract painting, composed of separate blocks of white, red and black on the canvas, could be applied directly to the dress by set up with jersey pieces woven by the Racine machine. Although the form is very simple, the body lines of the woman who wears it loom out in subtle. We can glimpse the highly sophisticated cutting techniques of Haute Couture designers. Saint-Laurent was known as an art collector. "Compositions" was in his possession as well.
After quitting from Christian Dior, Saint-Laurent launched his own fashion house in 1961, when he was only 25 years old. During the period when haute couture competed with the emerging prêt-a-porter and fashion trends were shifting, Saint-Laurent found out precisely what was required by the new age and released novel designs. In 1966, the year following the presentation of this dress, he opened a prêt-a-porter boutique in the left banks of Paris. He gained worldwide popularity with new elegance that matched everyday lives, such as A-line mini dresses and pants, and led the fashion trends in the late 20th century.