This dress is made of double-layered stretch material with an internal pad. It is part of the "Body-Meets Dress, Dress Meets Body" collection, through which the designer intended to unify body lines with the dress.
In 20th century fashion, the natural beauty of the human body was valued above all. However, this trend placed restrictions on dressmaking. Kawakubo tried to eliminate the stagnant relationship between the human body and the clothes that limited each other's development; that is, the human body restricted the clothes, while the clothes restricted the body. Her efforts resulted in Kawakubo creating designs with a fresh beauty, as seen in this one-piece dress, that had an impact throughout the world. Merce Cunningham (1919–2009), an eminent choreographer, was inspired by this dress to produce the dance performance "Scenario" (1997).
"Not what has been seen before, not what has been repeated; Instead, new discoveries that look towards the future, that are liberated and lively" (Message written by Comme des Garçons in the spring of 1997). Kawakubo has continued to explore new ways of expression, and she has always been standing at the very edge of the times.

MaterialMulti-colored polyester/polyurethane stretch organdy top with feather padding at the back and shoulders; marching skirt. 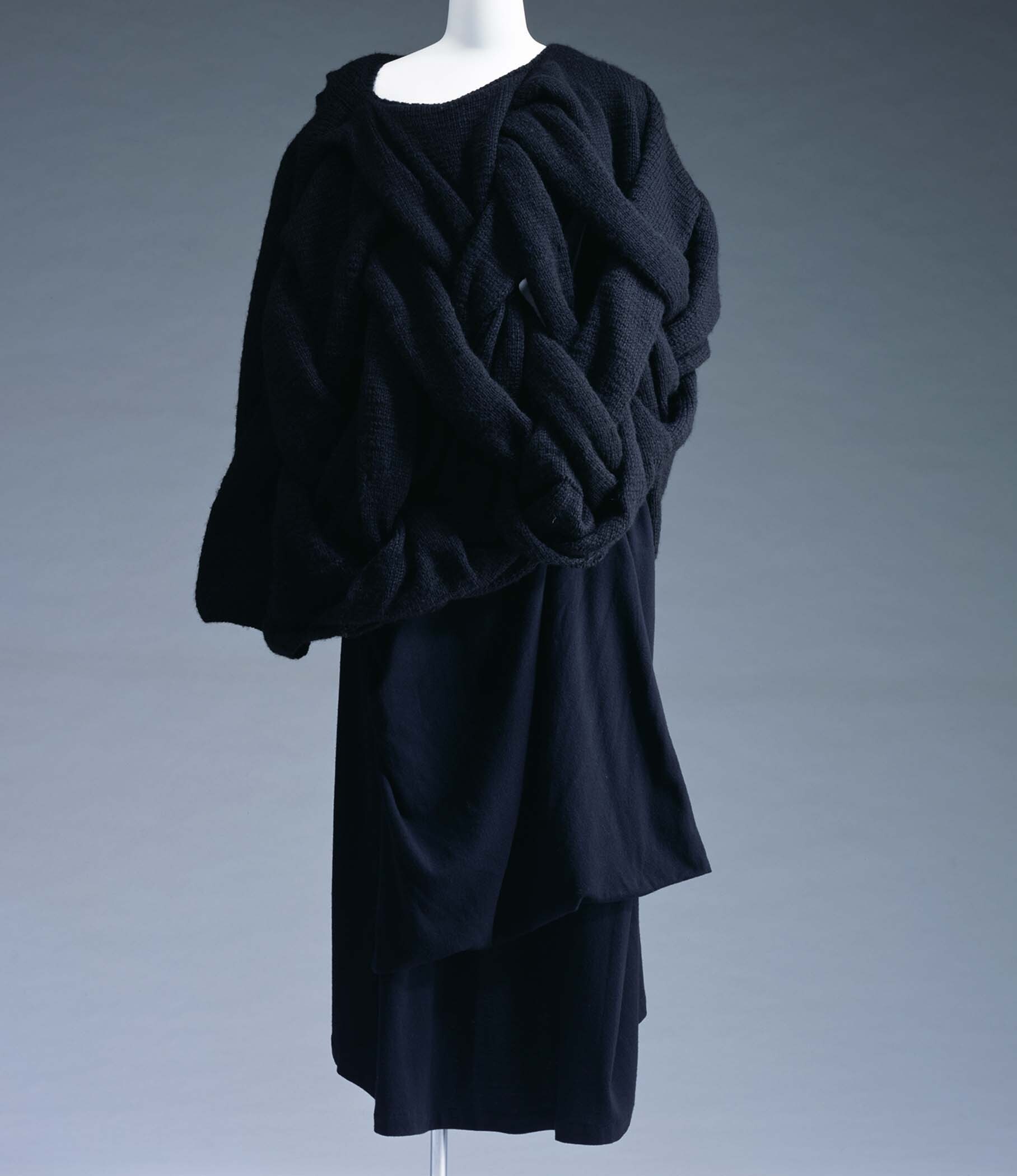 This is an important work from Rei Kawakubo in 1980s. She created a dramatic three-dimensional appearance and gave nuance to the sweater by braiding wide-knit panels crosswise. Her clothes were described as having irregular and awkward shapes, but they had presence and a quiet beauty.
At the beginning of the 1980s, when colors were used abundantly in fashion, Kawakubo's shows in Paris introduced achromatic, unstructured dresses, mainly in black. Kawakubo's clothes, which deviated from the existing aesthetic values in Western countries, were described as having a "beggar look." They were based on the aesthetic values of Japan, which accept shabbiness, and the color in her dress was a tranquil expression of harmonized blacks as in an Chinese-ink painting. Because the black color incorporated a new aspect that extended far beyond the framework of Western color expression, it drew people's attention, and became the color of the age during the 1980s. 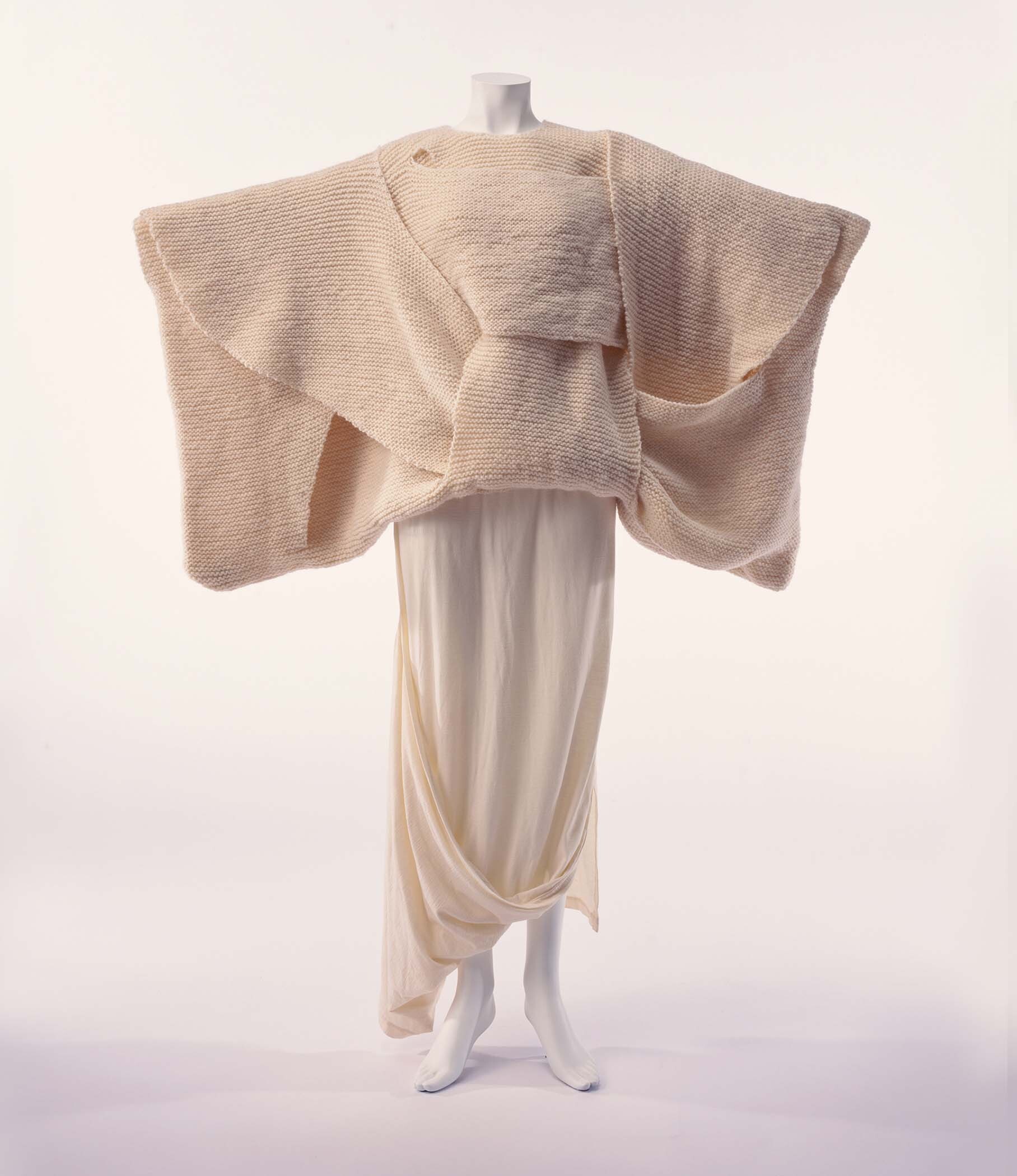 A piece of Rei Kawakubo which drew attention of the Western to the Japanese Fashion. The seemingly complex form of the sweater was created essentially from one straight panel, and has a dynamic voluminous look. The large sleeves spreading to the left and right resemble kimono sleeves. The skirt sags asymmetrically in response to the irregular shapes created by the loosely hanging sweater.
At the beginning of the 1980s, Kawakubo received a mixed response in Paris to designs that challenged existing aesthetic values in the Western countries due to their achromaticity, loose fit, asymmetry and deliberately-created holes and tears. Nevertheless, she has maintained a consistent attitude of defying stereotypes in dress designing ever since. 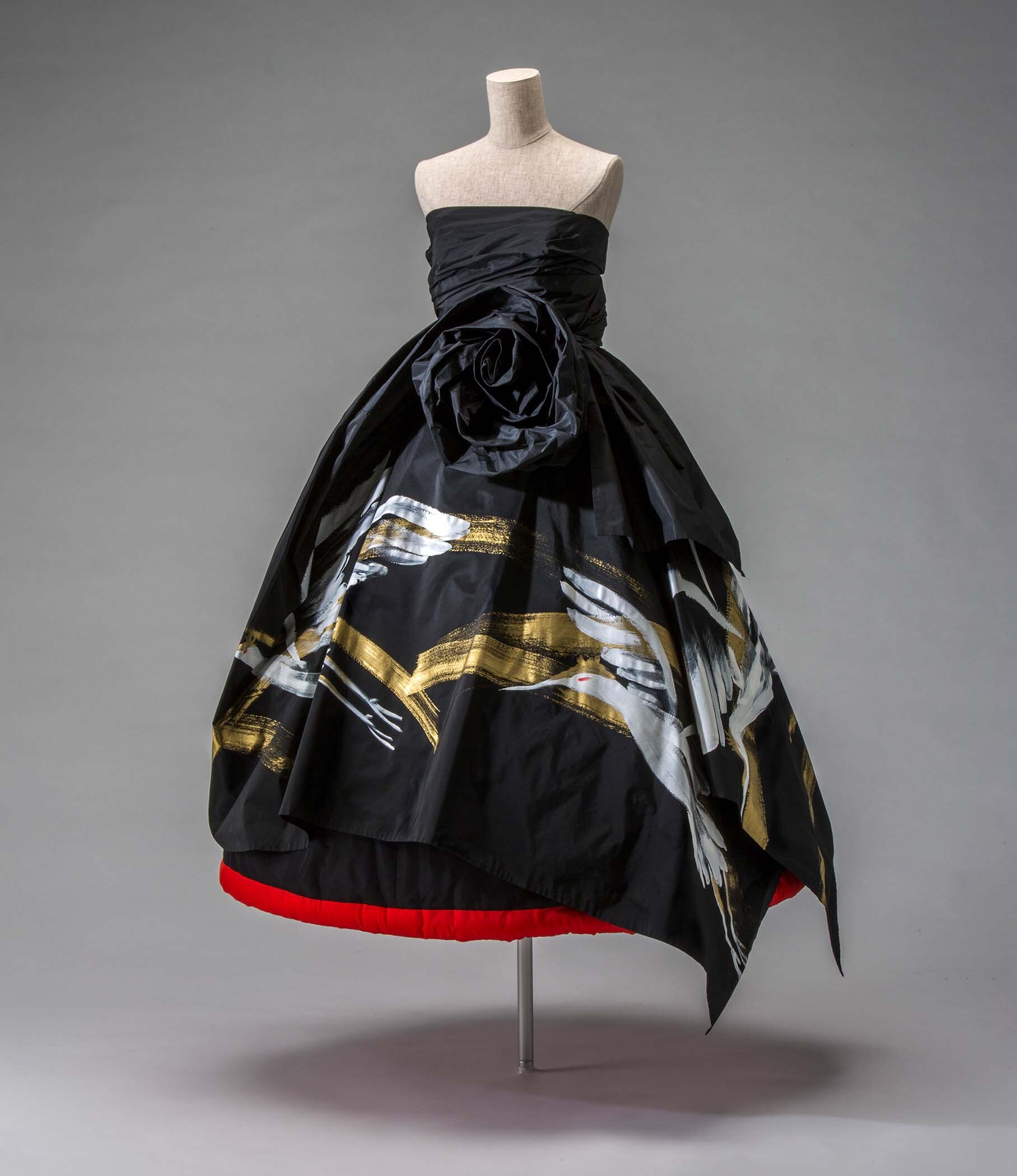 The keyword for the 1991 Comme des Garçons Noir collection were “chic pink,” “vinyl,” and “noir,” or black. Evening dresses with Japanese associations formed the finale of the collection and included this piece, in which a ‘yūzen’ (traditional dyeing technique) painter freely drew an avian design on this Western-style crinoline-like skirt.
Said Kawakubo: “I wanted to juxtapose the very naïve, almost childlike brushstrokes with the very formal evening dress” (VOGUE America, July 1991).
Inserting kimono-style cotton padding into the hem of the underdress lends the dress a certain élan while also giving it just enough weight to preserve its silhouette. Here Kawakubo blends the traditional beauty of East and West to create a new isiom and, in so doing, stimulates aesthetic awareness and demonstrates the designer can draw inspiration from whatever interests her.
(Translated by the Asian Art Museum, San Francisco for “Kimono Refashioned: Japan's Impact on International Fashion”, 2018.) 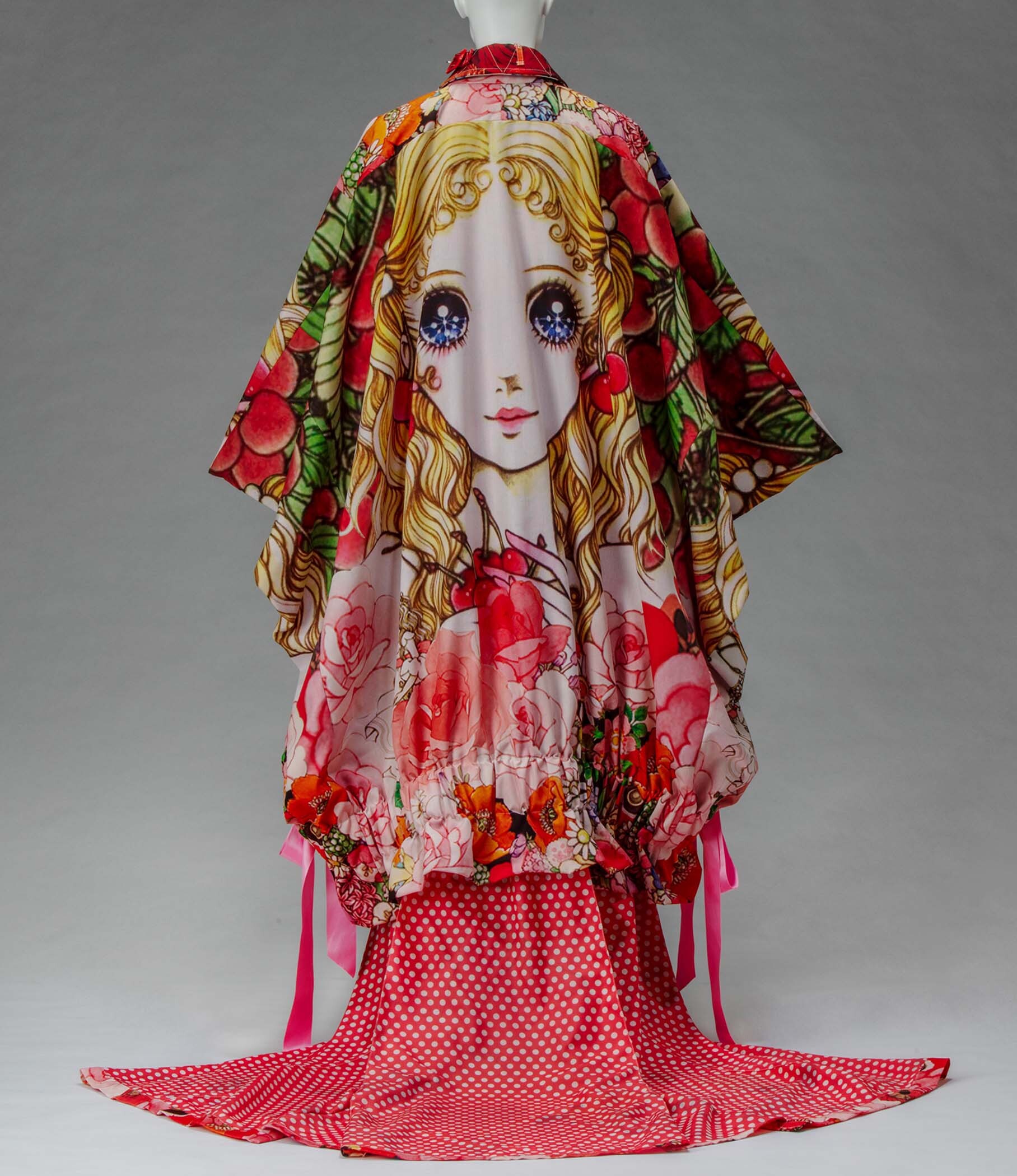 A dress with an oversize form that amply envelops the body, concealing arms and legs, sporting colorful inkjet illustrations of a doe-eyed young girl surrounded by a profusion of flowers. These graphics, strongly reminiscent of Japanese manga, are the creation of Macoto Takahashi, who provided cover art and illustrations for magazines targeting young girls from the 1950s to the 1980s, and who became a key mover in the kawaii culture that has now spread worldwide. Greatly enlarging Takahashi’s illustrations has made them visually stunning as well as cute. The resulting works are a direct representation of the style of Rei Kawakubo, who is known for designs that merge cuteness with strength, or that express the extreme or the excessive lurking in cuteness.
This dress is the signature piece of Comme des Garçons’ Spring/Summer 2018 collection, with its “multi-dimensional graffiti” theme. In addition to these illustrations by Takahashi, the collection includes prints by artists such as sixteenth century Italian painter Guiseppe Arcimboldo, and his contemporary Japanese suiboku-ga ink painter Sesson. Bringing together and curating an arbitrary group of two-dimensional images from ancient and modern artistic traditions, including both East and West, Kawakubo cuts the images along with the fabric, then reconstructs them three-dimensionally in the form of clothing. This approach can be seen as paralleling the freewheeling toughness of graffiti art that suddenly appears without context in urban spaces.