The dress is made from a showy red and gold brocaded fabric such as would be used for a luxurious obi waist sash. This garment has a unique construction: composed of a single rectangular piece of brocade and three pieces of jersey, it is essentially flat when placed on a flat surface, but when worn the jersey bow—crossed around the body and tied at the back—causes the brocade to stick out at the sides. The combination of gorgeous brocade and homely jersey gives this garment a modern nuance, and it stands as a fine example of the neo-Japonism of the mid-1990s.
Active since 1971, Yamamoto presented his first collection in Paris in 1981. With Rei Kawakubo, he sparked the so-called Japan Shock trend in Europe and the United States. While Japanese designers specializing in flat garments were sometimes criticized for producing formless clothing, Yamamoto, who is well versed in orthodox Western tailoring, is recognized as the Japanese designer closest to the West. At the start of his career Yamamoto did not directly incorporate any traditional Japanese aesthetic into his clothing, but he has since begun to introduce reconstructed elements of traditional kimono and obi into modern fashion.
(Translated by the Asian Art Museum, San Francisco for “Kimono Refashioned: Japan's Impact on International Fashion”, 2018.)

Pieces of organdie that waver like flower petals make the whole dress flutter, and incorporate heat-cut motifs displaying two styles of skull and crossbones. The motifs are combined in sets of several layers that are then attached to the dress by stitching. Decorativeness that befits an Undercover design is facilitated by and conceals this combination of an elaborate and painstaking manual process with the technology of heat-cutting. Jun Takahashi explained his approach for this season by saying, “Undercover has been creatively a very dark thing. Now I wanted to make something beautiful for girls—without any dark side.” (Style.com, October 1, 2006. Before then, with themes such as “SCAB” (SS 2003), “but Beautiful…” (AW 2004), and “guruguru” (AW 2006), Undercover had produced street fashion with a strong punk taste. This collection for his fourth year in Paris was highly acclaimed, giving a powerful boost to interest in the brand. 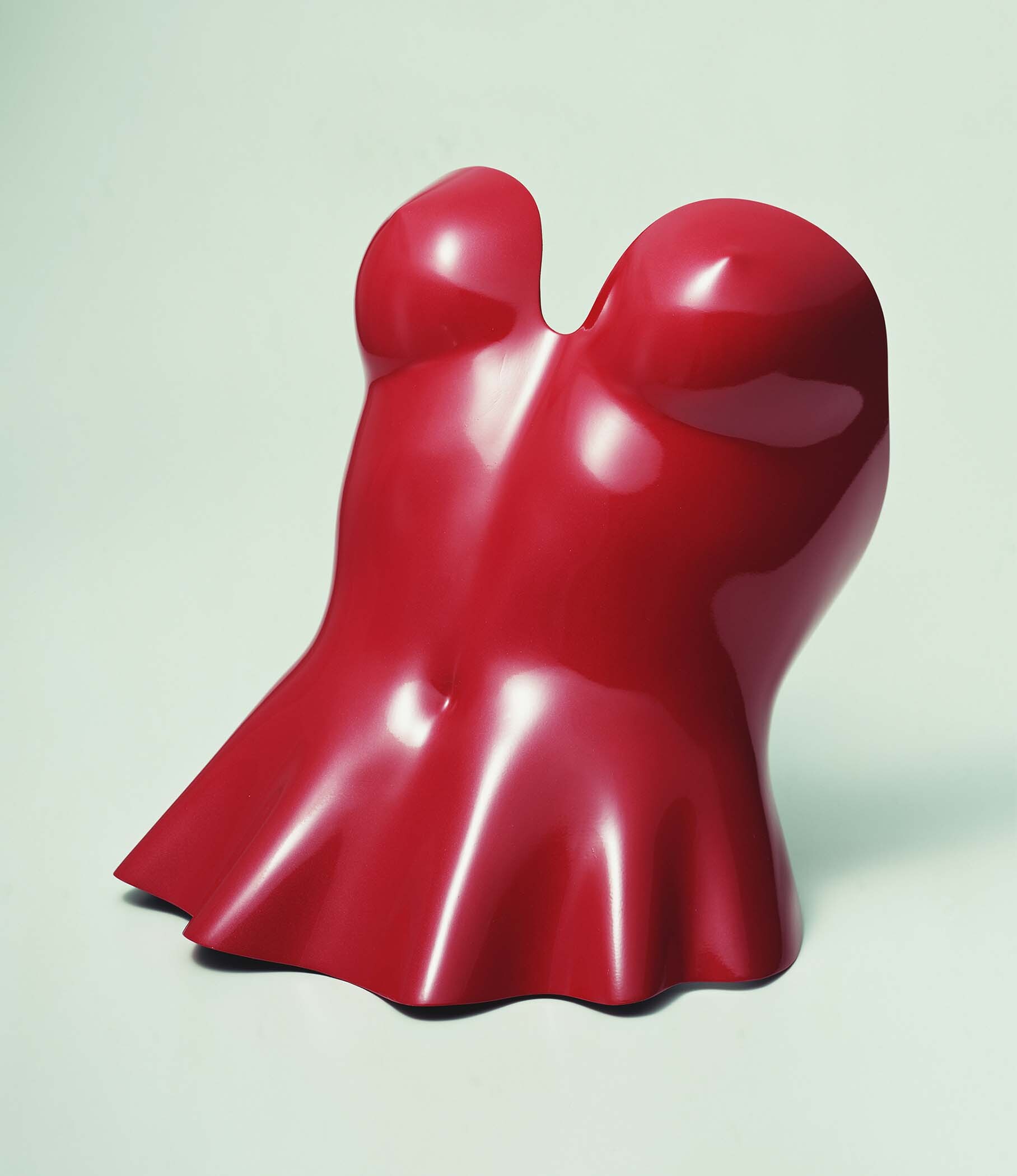 Beautiful woman's torso becomes a bodice. This super realistic expression was realized by taking a cast of a body with the help of a mannequin manufacturer. Although it covers the body, at the same time it makes us conscious of the body's existence, and it even stirs a feeling of voluptuousness engendered by the contrast between the inorganic plastic and the suppleness of the wearer's body. This is one of Miyake's best-known works.
This work was shown at the finale of the autumn/winter Paris collection in 1980, marking the start of the body-conscious fashion at that era. Miyake introduced a series of works including a bustier made of rattan and vinyl in 1982 and his "Silicon Body" in 1985. These works were the main exhibits in the "Issey Miyake Bodyworks" exhibition, which toured worldwide from 1983 to 1985. 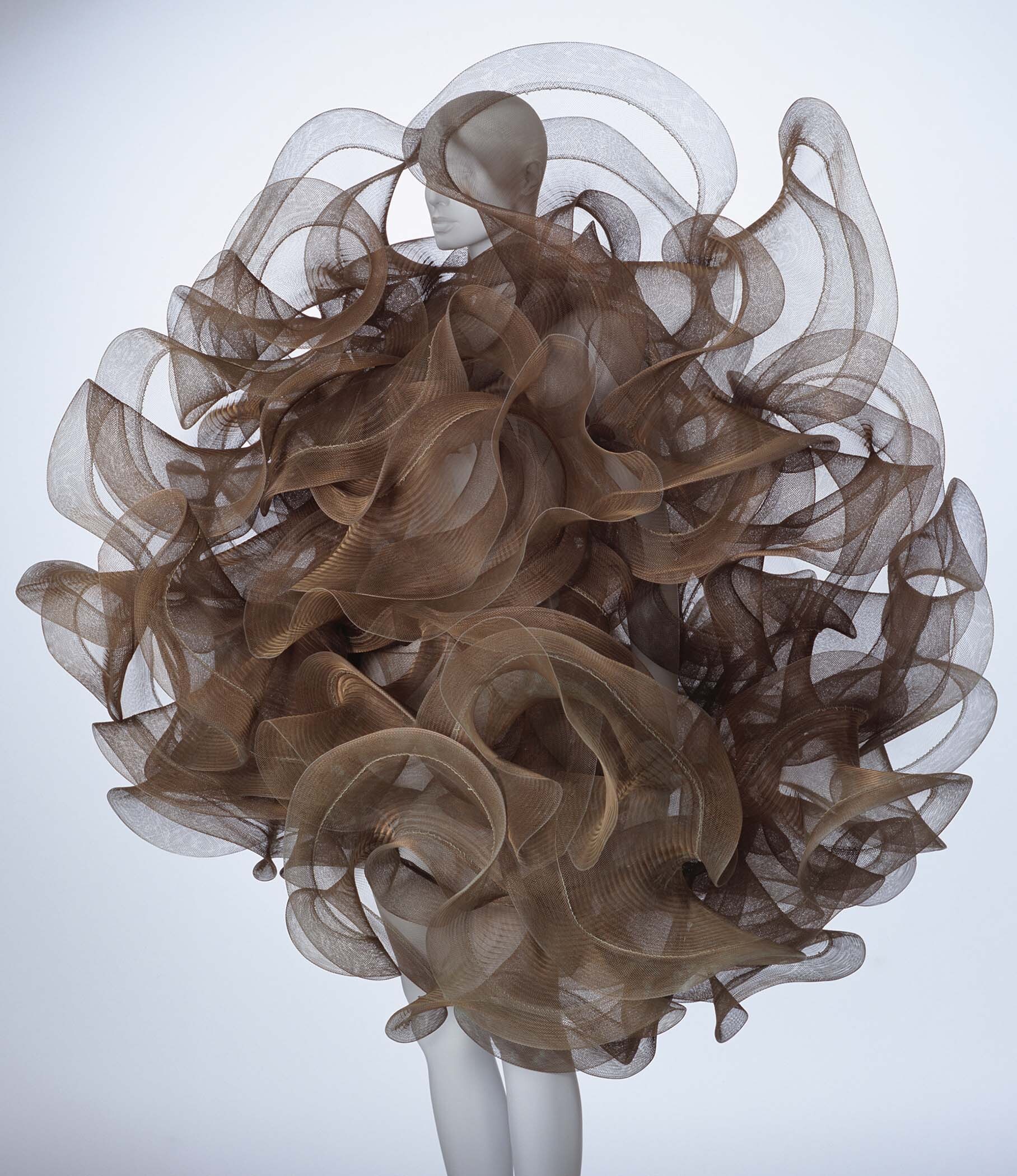 Voluminous waves of flounces create a kinetic form. Just like many other dresses by Tatsuno, this dress has a unique structure: a combination of two huge circles, each made from nylon net ribbons sewn up in spirals.
After he moved to London from Japan in 1980, Tatsuno learned fashion by himself. Free from preconceptions about conventional materials or cutting methods, he created dresses in his own way. After founding "Culture Shock" in 1983, he established "Koji Tatsuno" (1990-1994) and participated in the Paris Collection. Although he was engaged in the prêt-a-porter business, he introduced one-of-a-kind dresses and art-oriented clothes. He took charge of the prêt-a-porter line for Grès in 2003.
This dress was used as a costume for the main character of a film titled "The Pillow Book" (directed by Peter Greenaway (1942–)) in 1996. 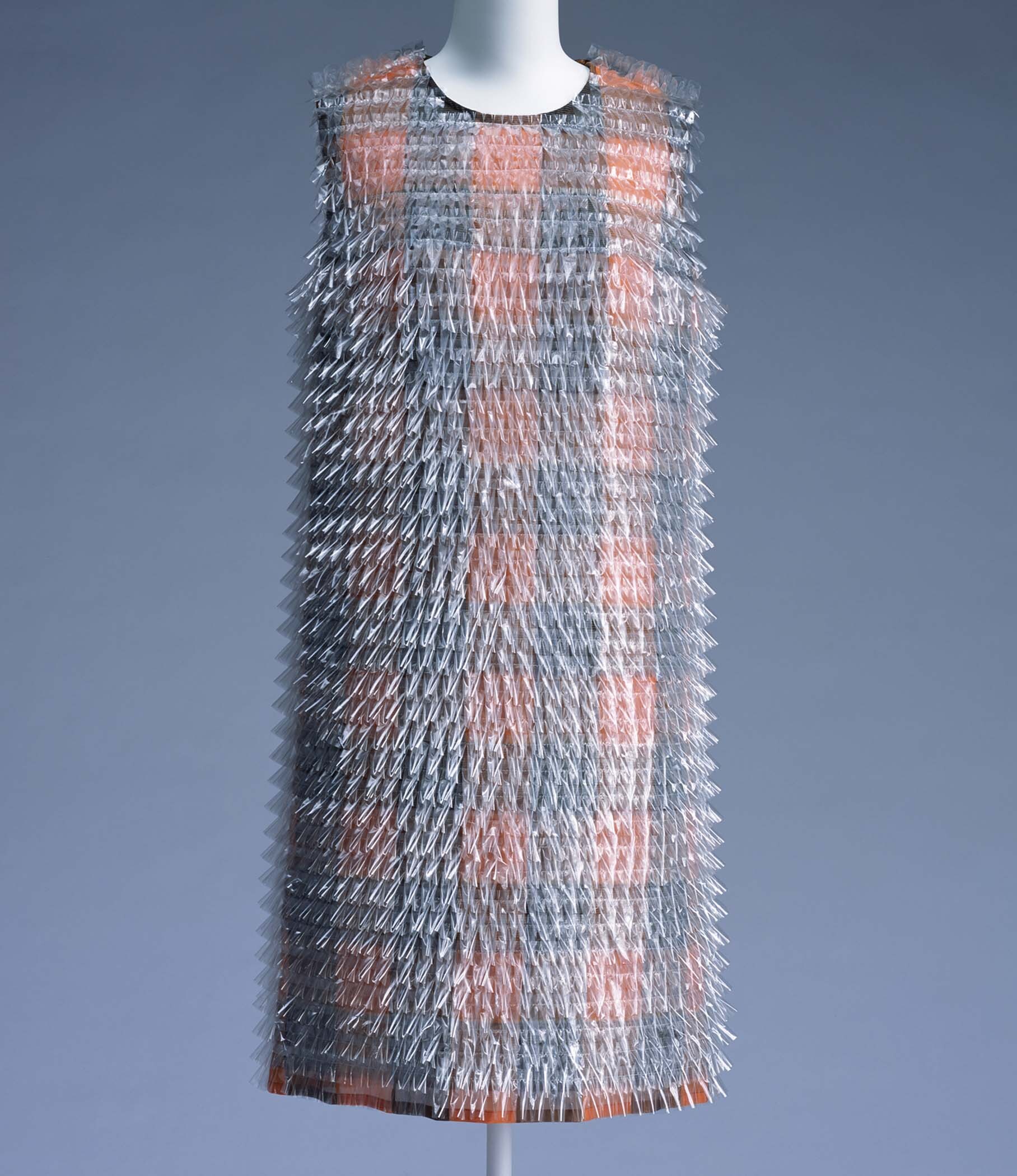 Junya Watanabe explores the properties of new materials, and uses their characteristics to maximum effect in his designs. This dress has a mysterious texture that amply demonstrates his abilities. A simple tubular dress covered with polypropylene scales, it seems inorganic at first glance. But when the wearer moves, and the fabric deflects, the texture changes dramatically, stirring emotions. Watanabe selects fibers that make the textiles more breathable and water-repellent, varying their combinations and dyeing methods. Employing high-tech weaving that ensures a pleasant feel of the materials, he creates clothes with an abundance of fantasy. According to the November 8, 1999 edition of the Senken Shimbun, this season’s show attempted to demonstrate the quality of the material to withstand 80 washings by the surprising and delightful expedient of creating artificial rainstorms to drench the models on the runway. 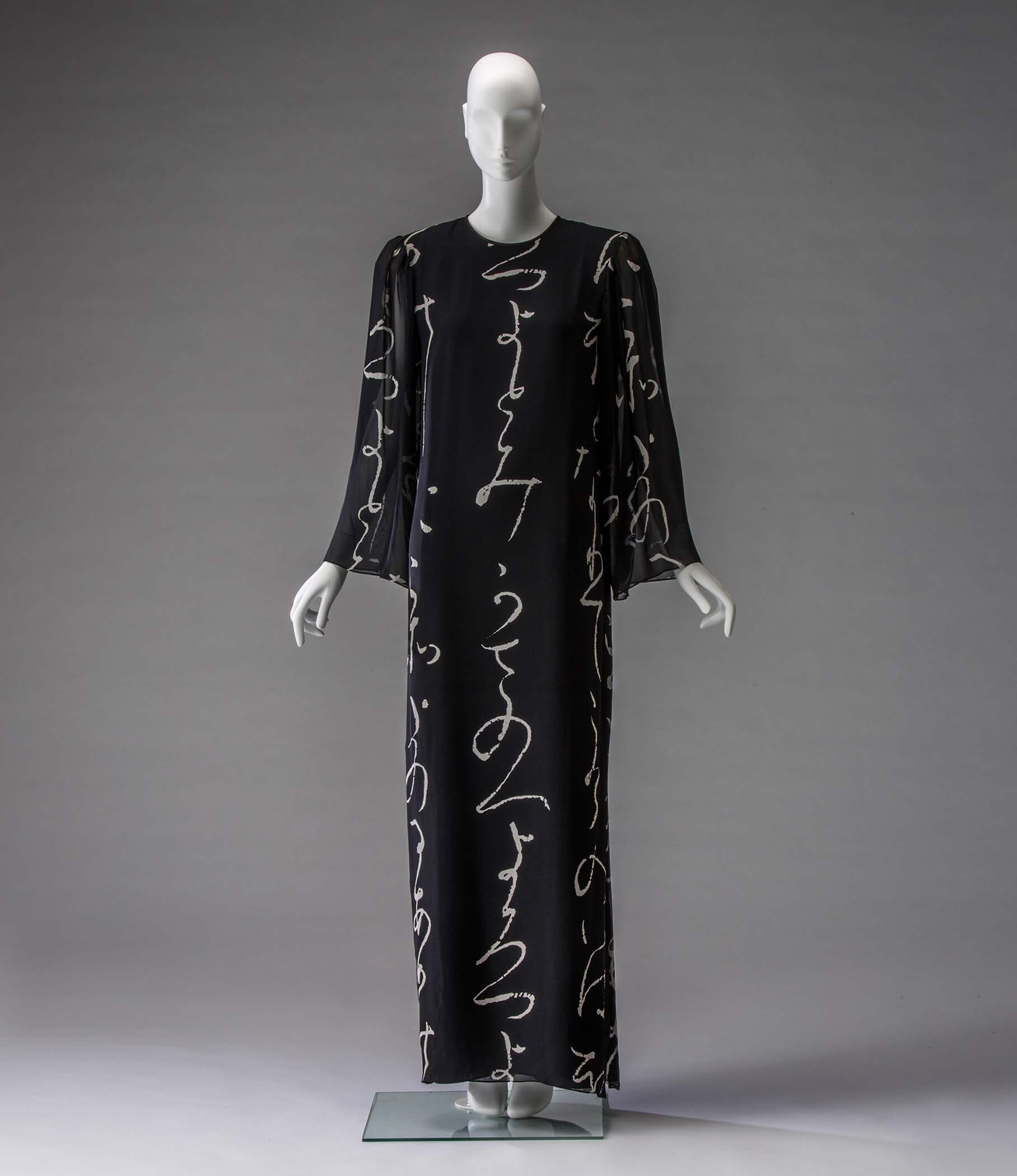 Lines—apparently from a Japanese poem—are written on the thin silk chiffon of this dress in the unique flowing Japanese script called hiragana. The brushstrokes appear in white on a black ground, so they seem to stand out in relief. The vertical rows of hand-calligraphed characters on the delicate fabric, the straight lines of the dress, and the puffy sleeves all sway back and forth with the movement of the wearer.
The practice of incorporating Chinese characters or Japanese script into garments began in the Heian period (794–1185) and became especially popular after the seventeenth century (see fig. 1). Later, script often appeared on clothing as an expression of Japanese chic, stylish and sophisticated, known as iki. In kimono, often decorated with themes taken from poems and stories, the calligraphic characters are frequently presented as designs to be enjoyed in their own right. For example, the source and meaning of the writing on this dress are obscure, rendering the characters elements of pure design.
Mori had her first foreign show in New York in 1965. From the outset she incorporated designs deliberately evocative of Japanese traditional beauty into Western garments, which brought her attention from Western media. In 1977 she was the first East Asian to be invited to the Paris haute couture fashion week, and the iconic piece that she presented at that time—also bearing ink painting and calligraphic designs—came to represent her signature style.